↓ Skip to Main Content
Home › OVER THE YEARS › THE DOUGHBOY

The Spirit of the American Doughboy

The “Spirit of the American Doughboy” is memorialized in this statue by Ernest M. Viquesney. 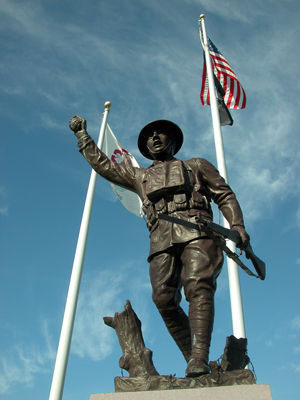 Following The Great World War patriotism was very high in Monroe County.  In Columbia, Illinois Memorial Day, originally called Decoration Day, had been observed by members of the Grand Army of the Republic [ G.A.R.] since it’s inception during the late 1860’s.  By 1920 the ranks of the G.A.R. were nearly depleted.  As a result, the newly formed American Legion Post 581 began organizing the Memorial Day ceremonies.  It was felt that a fitting monument should be erected to commemorate the sacrifices made by our local veterans.  While the focus of the statue was on the Doughboy of the Great War [ World War One ]  the monument was dedicated to “Our Sons and Daughters who served there nation in freedoms cause” during the Six Great Wars.  Those being;

A few years later it was again relocated because that site was needed for construction of the new Public Library in Columbia.  Since that time the “Doughboy” has stood on the grounds of Post 581’s Legion Park.  During the existence of the memorial, another plaque has been added to the side.  As a testament to the continuing struggle for freedom, three more wars have been added;